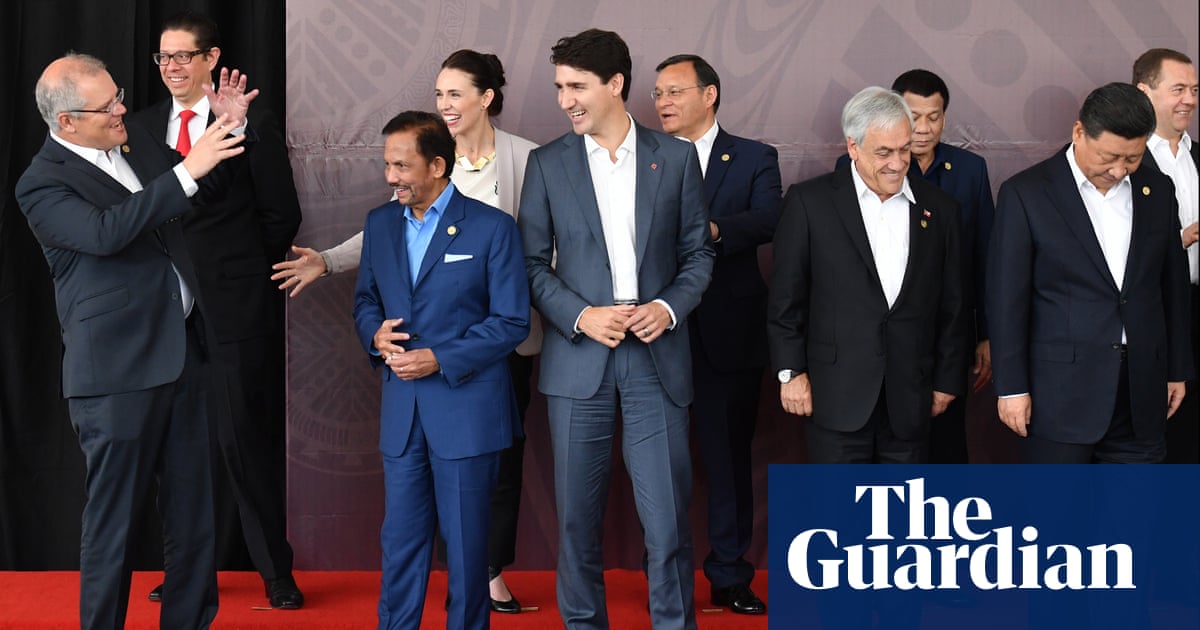 Scott Morrison says the United States and China are getting closer to resolving a trade war that threatens economic growth in the region, downplaying tensions on display during the Apec summit about Beijing’s expansionist ambitions in the Pacific, and the impact of globalisation.

The Australian prime minister said on Sunday the US and China were aware that other Apec countries wanted to see an end to the tit-for-tat trade spat that has played out since July, and he said “there is a lot more progress being made here than is probably being acknowledged”.

“I think every day brings us closer to a resolution,” Morrison told reporters in Port Moresby. “There’s a lot of movement under the water … and I’m encouraged by that.”

Morrison said it was important to resolve the impasse between Washington and Beijing “sooner rather than later” and pointed to a recent assessment from the International Monetary Fund that the dispute would hit economic growth in China – an eventuality that would create headwinds for the Australian economy.

The Australian prime minister met briefly with the Chinese president at Apec, and Xi Jinping is also due to meet Donald Trump – who skipped the gathering in Port Moresby and sent his deputy, Mike Pence – at the G20 meeting later in the month.

As well as the tensions over security and economic issues on display at the summit, the ABC also reported there was a diplomatic incident involving a group of Chinese officials who attempted to force their way in to the office of the PNG foreign minister, Rimbink Pato, after being denied a meeting on Saturday afternoon.

The report said the Chinese officials wanted a discussion with Pato about the wording of the communique to be released at the conclusion of the Apec summit, and security was called, before the group left.

Infrastructure has been a major theme of this year’s Apec. Australia joined with Japan and the US to make new infrastructure commitments for the South Pacific that are clearly designed to curb China’s influence, although Morrison said Australia’s pivot to the Pacific is not intended to be exclusionary.

On Sunday, the Morrison government made a commitment with Japan, New Zealand and the US to bring electricity to 70% of the population of Papua New Guinea by 2030. The PNG prime minister, Peter O’Neill, said the project would enable the citizens of his country “to connect to a digital economy and, of course, participate fully in a global economy”.

Morrison told reporters it would be funded from Australia’s new $2bn infrastructure financing facility, unveiled in the build-up to the Apec summit. Australia will contribute $25m over the first year of the electrification project, which will also involve laying internet cables, and New Zealand has pledged $20m.

The Australian infrastructure financing facility is designed to counter China’s spending in the Pacific under the Belt and Road initiative, but Australia’s former minister for international development and the Pacific, Concetta Fierravanti-Wells has expressed concern about the new fund being a loan facility when the Pacific already faces a substantial debt burden.

As well as the electrification commitment, there is a separate commitment by Australia and the US to construct the Lombrum naval base – a port China had expressed interest in developing.

Lombrum will be the base for Pacific patrol boats that Australia has already gifted to PNG. Morrison said on Sunday there would be both a civil and a strategic dimension to maritime activity out of the port, with PNG using the assets to patrol its fisheries.

The Americans said after Morrison’s meeting with Pence the two leaders had discussed infrastructure, “noting the need for broad economic development that includes the private sector, based on principles of openness, transparency, genuine need, and a sustainable debt burden, in accordance with international standards”.

The read-out from the meeting also makes it clear the Americans are investing in the South Pacific to keep the sea lanes open. It said Morrison and Pence “reiterated a shared commitment to freedom of navigation and overflight and a rules-based order in which all nations are sovereign, strong, and prosperous”.

Pence expressed concern about projects increasing debt levels in the Pacific – offering similar analysis to Fierravanti-Wells, who lost her frontbench spot in the recent Liberal leadership turmoil – although his public comments were clearly directed at Beijing.

The US vice president said infrastructure loans, which have been deployed by Beijing with Pacific countries, had “opaque” terms, and threatened the sovereignty of small nations.

“Projects they support are often unsustainable and poor quality. Do not accept foreign debt that could compromise your sovereignty,” Pence warned. “Protect your interests, preserve your independence and just like America, always put your country first.”